As part of our environmental responsibility, it is important to find vendors that share the same concern with the environment. 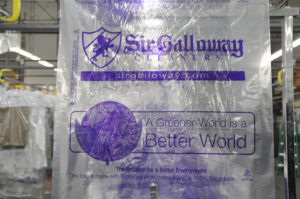 In the Dry Cleaning and Laundry industry plastic bags are an environmental concern.

These bags are generally made of three options:, and there is significant difference between:

Conventional poly is unfortunately used by the vast majority of cleaners.

This material cannot be recycled by a recycling facility.

Furthermore, conventional poly does not break down (i.e., biodegrade) in a landfill or breakdown (i.e., degrade) in the environment.

It is composed of petroleum-based materials called resins that are resistant to biodegradation or degradation.
Conclusions:

Some cleaners claim that their poly is “biodegradable.”

Like conventional poly, biodegradable poly cannot be recycled by a recycling facility.

In order to transform conventional poly into biodegradable poly, manufacturers add a special, patented additive to the resin during manufacture – an additive that is a food source for bacteria, fungi and algae.

The problem, however, is that biodegradable poly must be buried in a biologically active environment (such as a landfill) in order to degrade.

Biodegradable poly will NEVER degrade UNLESS it’s buried in a biologically active landfill.

Degradable poly is used by a few cleaners.

With degradable poly, degradation depends on light, heat or air, does not require burial in a biologically active environment (such as a landfill), does not depend on direct contact with microorganisms and/or other materials that are themselves biodegrading in the landfill, produces no methane gas, and breaks down in less than 2 years.

As members of the Green Cleaners Council, Sir Galloway Cleaners in Miami, is one of those cleaners committed to protect the environment. by operating a green plant. From the cleaning products to the packaging, you will feel good knowing your clothing is cleaned and processed with environmentally friendly methods. They use biodegradable poly bags, recycled hangers and offer hydro carbon cleaning; all to better take care of you and the environment.

Trust us to treat your garments with the level of expertise that provides the utmost care and attention to detail.